The Discount to Tencent

It is commonplace for investment holding companies to trade at a discount to the value of their underlying assets. This discount is usually around 20% to 30% depending on the assets held. Efforts are often made to “unlock” this value into the hands of shareholders by “unbundling” the assets directly into the hands of those shareholders. Private investors can sometimes score a windfall by buying into an investment holding company which is trading at a significant discount and then benefiting from their efforts to release or unlock the value.

Naspers (NPN) has been increasingly undervalued in terms of its underlying assets for many years. For example, it has been recently estimated that the company’s shares are now trading at a 42% discount to the value of its indirect 31% holding of Tencent – the Chinese internet and social media giant. That discount has widened sharply in recent months as the Tencent share price on the Shenzhen stock exchange in China has risen by almost 30%. END_OF_DOCUMENT_TOKEN_TO_BE_REPLACED

South Africa is the land of monopolies. Historically, under the National Party, South Africa was cut off from the rest of the world and isolated from international competition. This led to the development of massive local monopolies such as that of SA Breweries and Anglo American (which at one stage controlled more than 50% of the blue chip companies on the JSE). Many of those monopolies consisted of enormous conglomerates of companies tied into structures which usually left them trading at considerably lower prices than the value of the share which they owned.

In the new South Africa, there has been a trend towards breaking up those structures and releasing shareholder value. One of the most recent examples has been Naspers which first unbundled Multichoice into the hands of its shareholders and then restructured with the formation and listing of Prosus on the Euronext in Amsterdam.

It is a well-known fact that investment holding companies traditionally trade at a discount to the value of their underlying assets. This discount can be anything from 10% to 40% depending on the company. One of the ways to “unlock” this value is for the holding company to unbundle the shares of a subsidiary or a large holding into the hands of its own shareholders.

Thus, if company “A” owns a 40% interest in company “B” it can distribute that holding of company “B” shares to its own shareholders and then it steps out of the picture and the structure is simplified. This often has the effect of increasing the prices of both companies’ shares on the JSE. END_OF_DOCUMENT_TOKEN_TO_BE_REPLACED

On 31 October 2017, we published our usual monthly Confidential Report and in it we drew your attention to Altron. What we said was:

“For the two years between 2014 and 2016, Altron did badly, but since then the share has executed a long slow “saucer bottom” and now appears to be mounting something of a comeback. The newly appointed CEO, Mteto Nyati, is at the front of this new optimism. 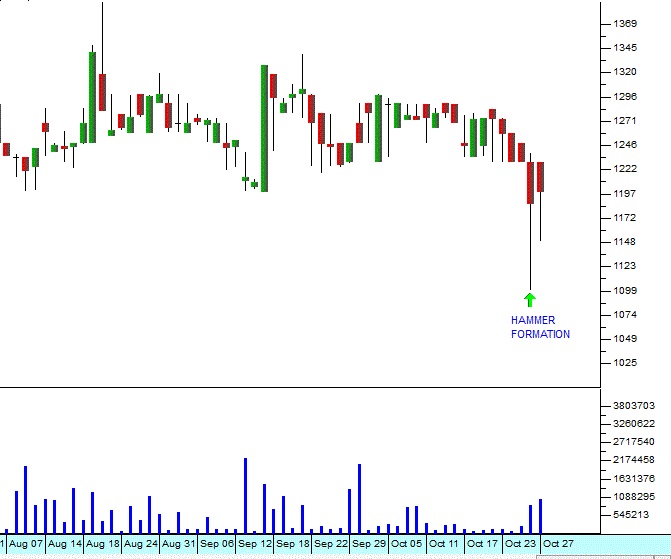 END_OF_DOCUMENT_TOKEN_TO_BE_REPLACED

During a strong bull trend 80% of investors are bullish and 20% are bearish – which is why the market rises quickly. The opposite is true of a bear trend. But during both bear and bull trends there is far less uncertainty among investors as to what will happen next. Uncertainty usually expresses itself in sideways markets. During a sideways market (sometimes called a period of “consolidation”) opinion about the future direction of the market is evenly balanced between bulls and bears.

From a technical perspective, the further that a chart departs from its average, the more volatile it becomes and the less certain the future becomes. The most predictable chart is a straight line – the further a chart departs from that, the less predictable it becomes. At the same time, the more volatile a share becomes, the more opportunity there is for capital gain. So, we can reduce this discussion to three words:

And risk is not necessarily a bad thing because it brings with it the opportunity for profit.

For the private investor it is important to be able to gauge the level of volatility in the market. One of the best ways to do this is by using Bollinger Bands. END_OF_DOCUMENT_TOKEN_TO_BE_REPLACED

The Federal Reserve Bank of America (Fed) has cut rates again by a further 0,25% which indicates that the monetary policy committee (MPC) is still concerned about the possibility of the US economy sliding into recession.  At the same time Europe has resumed its quantitative easing program also because of fears of a recession. Some of this is certainly due to the trade war between America and China. Nobody is quite sure how that will play out in the world economy and the primary result has been a shift towards “risk-off”. This risk-off sentiment has had an impact on the S&P500 index and also on the South African rand. Consider the chart of the S&P500 since April 2019:

This shows the previous cycle low at 2744 made on 3rd June followed by the rise to the all-time record high at 3025 on 26th July. After that, Trump managed to invoke the next correction with his China trade war taking the S&P down to support at around 2840. A period of sideways movement followed, generating a “flag formation” which we predicted on 4th September would break to the upside. That upside break has occurred, but a new record has not yet been set. The index is currently falling back towards the resistance line of the flag formation – which is at around 2932. That resistance has now become a support level.

In our view, we expect that the index will move upwards from current levels and break above the all-time record high – probably sometime in the next month. That will signal a resumption of the great bull market which has been in progress for over ten years since March 2009. END_OF_DOCUMENT_TOKEN_TO_BE_REPLACED