The strong upside break of the S&P500 index above its previous cyclical high at 3025 shows that the potential for a “triple top” formation is now behind us – together with October month. Consider the chart:

There had been some concerns among investors that the rising triple top (with tops in Jan 2018, September 2018 and July 2019 shown above with the red circles) would predicate a new bear trend potentially from October 2019. October is traditionally a scary month for investors following the collapses of 1929 and 1987.

We never had that opinion. We always thought that the underlying power of the booming US economy would drive share prices higher in a continuation of the great bull market which began in March 2009. The S&P has powered ahead and is more than 4% above the last of the tops in a strong new upward trend. On average, the S&P has gained about 1,7% in December month. While markets tend to have lower volumes because of the holiday season, once October is past there is usually a relief rally through to January of the new year. END_OF_DOCUMENT_TOKEN_TO_BE_REPLACED

The Federal Reserve Bank of America (Fed) has cut rates again by a further 0,25% which indicates that the monetary policy committee (MPC) is still concerned about the possibility of the US economy sliding into recession.  At the same time Europe has resumed its quantitative easing program also because of fears of a recession. Some of this is certainly due to the trade war between America and China. Nobody is quite sure how that will play out in the world economy and the primary result has been a shift towards “risk-off”. This risk-off sentiment has had an impact on the S&P500 index and also on the South African rand. Consider the chart of the S&P500 since April 2019:

This shows the previous cycle low at 2744 made on 3rd June followed by the rise to the all-time record high at 3025 on 26th July. After that, Trump managed to invoke the next correction with his China trade war taking the S&P down to support at around 2840. A period of sideways movement followed, generating a “flag formation” which we predicted on 4th September would break to the upside. That upside break has occurred, but a new record has not yet been set. The index is currently falling back towards the resistance line of the flag formation – which is at around 2932. That resistance has now become a support level.

In our view, we expect that the index will move upwards from current levels and break above the all-time record high – probably sometime in the next month. That will signal a resumption of the great bull market which has been in progress for over ten years since March 2009. END_OF_DOCUMENT_TOKEN_TO_BE_REPLACED

The concerted attack on President Ramaphosa and his retinue has seen the rand fall to almost R15.50 to the US dollar. But this fall also includes and is confused with a sharp international shift to “risk-off” as a result of Donald Trump’s trade war with the Chinese and their currency retaliation, which makes it difficult to accurately assess the impact of the attacks on Ramaphosa. The best way to evaluate the importance of these attacks and distinguish them from what is happening internationally is to look at the yield of the South African government’s 10-year bond, the R186. Consider the chart:

END_OF_DOCUMENT_TOKEN_TO_BE_REPLACED

For most of June and July this year, the rand was strengthening as international investors became more confident of the reforms which the Ramaphosa administration was implementing. Now the battle between Ramaphosa and the Public Protector has become sufficiently aggressive and dangerous to unnerve international investors – causing some of them to withdraw their funds from our government bonds with the result that the rand has fallen 7,5% in the last two weeks.

The yield on our R186 long bond has increased by 6,3% to 8,46%. Overseas investors are now willing to forgo this relatively high return because of the increased political risk in the country. Clearly, this trend is not good for South Africa or private investors. The fight within the ANC comes on top of the problems of financing Eskom and lower tax collections to indicate that the government deficit is probably going to widen substantially. Moody’s is under mounting pressure to follow the other ratings agencies and downgrade us to sub-investment.

Unfortunately, it is very difficult to ascertain exactly what is happening behind closed doors. We can only watch the markets, especially the rand and the yield on the  R186 for clues – and right now the news on that front is not good. The markets are communicating that there is a chance that Ramaphosa might lose his position of power in the ANC – and if that happens then the economy and the stock market will be in dire straits.

A new concern has arisen with RMB’s John Cairn’s saying that there is a high probability (47%) that the rand will fall by as much as 30% or more once the US begins a new cycle of reducing rates over the next year – simply because it always does that when interest rates are falling in the US. Against this, it seems that the recent cut in rates in the US is just a “mid-term adjustment” and not the beginning of a new trend of lower rates. END_OF_DOCUMENT_TOKEN_TO_BE_REPLACED

For most of June and July this year, the rand has been strengthening as international investors became more confident of the reforms which the Ramaphosa administration is implementing. It has, of course, been very volatile because it is buffeted by many factors which are outside South Africa – most notably the probable reduction of interest rates in the US and various developments in other emerging economies. But Ramaphosa’s decision to re-appoint Kanyago as Governor of the Reserve Bank and two long-serving insiders as his deputies has largely put to bed the fears surrounding that institution and the talk of quantitative easing. The rand responded positively, but now a new concern has arisen with RMB’s John Cairn’s saying that there is a high probability (47%) that the rand will fall by as much as 30% or more once the US begins a new cycle of reducing rates over the next year. Since the election result the rand remains in a strengthening trend: 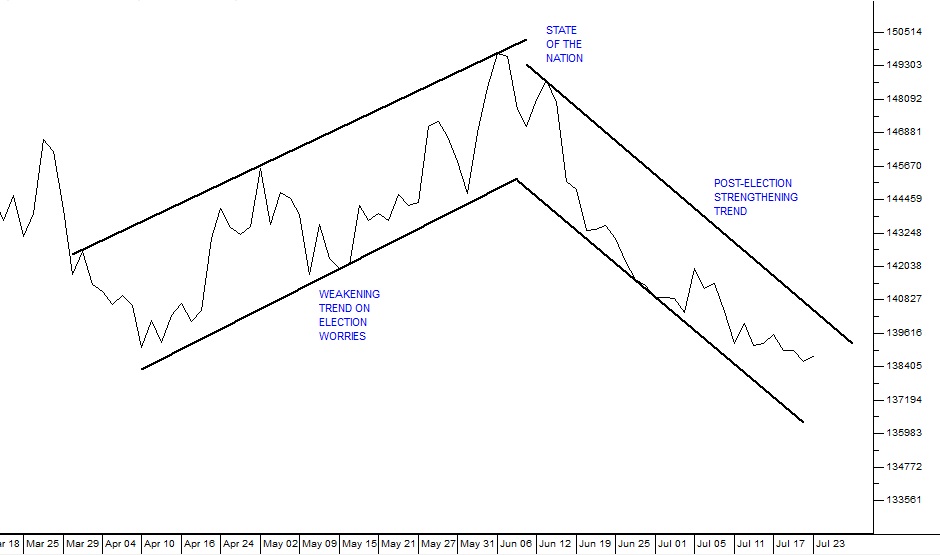